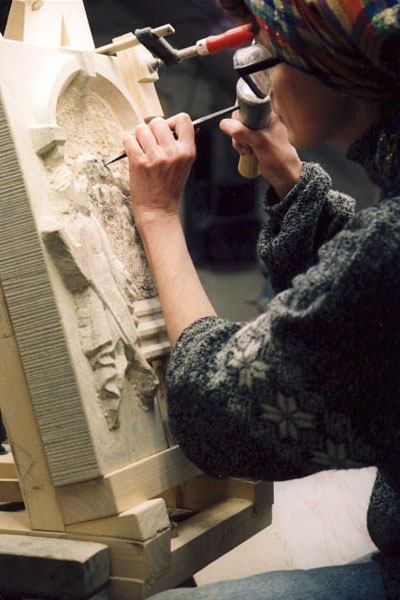 (1958) studied at the Academy of Fine Arts in Utrecht, specialty Theatre Design. After several years of working in theater and television industry, she started sculpting. Since 1997 Roemer works independently. She got commissions for sculpture, tombs, bronzes and sundials, restoration, awards and a bronze relief for the crematorium in Winschoten. She also made urns, free work, portraits and the four memorials to the Pyramid of Austerlitz. Mostly used materials are stone and bronze, sometimes combined with glass. Nowadays she works on free productions, sometimes with theatrical elements (installations) both in expression as in the position of the viewer, who plays a role in it. Her CV can be seen here.

In the period that I was occupied making memorials this theme was given form by the symbolisme of the fruit and seed; the-in-betweens of two lives and the tension that it contains.

The more abstract objects coming forth from this image show the same tension inside itself; tension between material and absence of material, always in organic forms.

In the sculptures I recently made, developed during and coming forth of my Artist-in Residency in the south of Sweden 2013, the inner space between two masses has more importance than the outer form of the sculpture. The tension is given form by absence of material. The immaterial shows itself by the material.

In consequence of this idea I now want to focus more at the meaning of connection.

The installation LAST MINUTE deals about the things men are chasing at during their life-times; the elusive ‘something’; maybe life itself. What would be LIFE itself? In the space between material forms I try to express my thoughts about that; vibrations, energy, warmth, thoughts, the urgence to connect or to disconnect, everything that is invisible and yet perceptible.

Since my working period in Sweden I visualize this idea also by means of THE CLOUD. Everything that moves around the world, that integrates and disintegrates constantly can be seen in a cloud. Water and air are maybe the most elementary elements to life. They litterally connect people (water and air run through us all) in a material (=horizontal) way but also connect people in a symbolic way; is not the cloud the most specific symbol of thoughts and dreams? Thoughts and dreams are also migrating around the world in a constant current. There is not ONE thought or dream that is not shared with someone else. And last but not least; Clouds are vertical connections between earth and sky, between material and least material, symbolizing in a vertical way the connection between the living and the dead, past present and future.

I am working on realizing this symbol of connection by executing CLOUDS around the world (WW-CLOUD-project), in different materials, in different settings.

May the tension between the pieces (instead of a fixed and brakeable one) become more mobile and therefor a playful interspace between people world wide”.